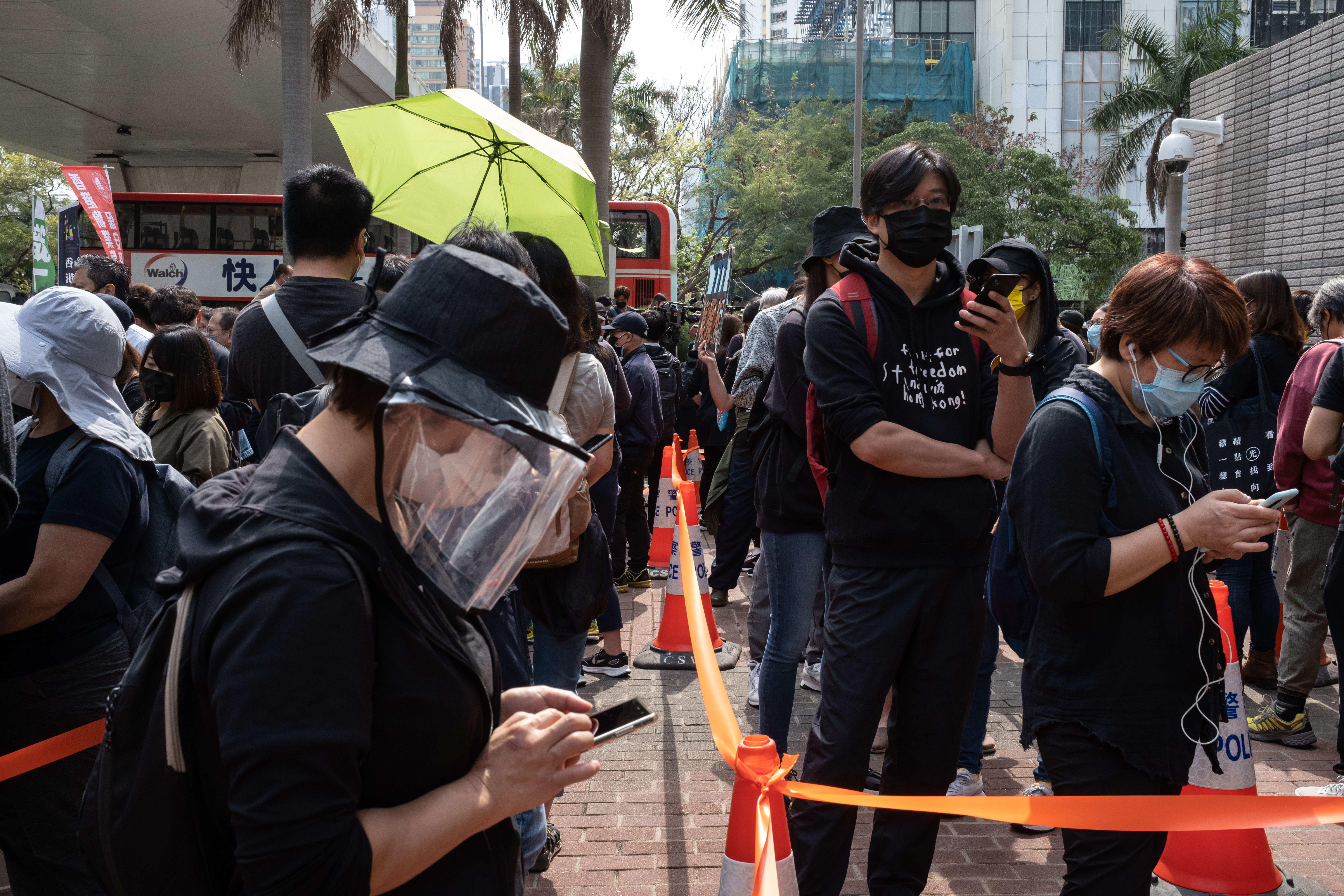 On Sunday, 47 pro-democracy lawmakers and activists in Hong Kong were charged with subversion under China’s new national-security law — a law designed to snuff out personal liberties. Darkness has fallen on the freedom-loving territory.

Sunday’s was the largest mass charge of the opposition since the law went into effect last June: The 47 had all been arrested in January, released on bail while police continued their investigation, rounded up again and now charged.

Their “crime”? Organizing and participating in a primary election for pro-democracy candidates last summer. Beijing authorities assert the move was akin to trying to overthrow the government. Never mind that the primary was an unofficial one, aimed at helping decide which candidates stand the strongest chance of winning an election, as happens in all normal democracies.

The territory’s Beijing-backed chief executive, Carrie Lam, had warned the pro-democracy folks that their participation might violate the new security law. And it isn’t at all hard to violate the law, since it more or less criminalizes any resistance to the Chinese Communist Party — the territory’s long-independent legal system and local laws be damned; China simply can’t abide democracy prevailing in any form.

Despite the obvious threat, the opposition charged ahead with the informal poll, and 600,000 Hong Kongers showed Beijing exactly what they thought about such fear-mongering by showing up to cast their votes anyway. I’d call it a democratic middle finger to Lam and Chinese strongman Xi Jinping, except Hong Kongers are studiously polite.

The charging of the activists — 39 men and eight women, ages 23 to 64 — gives proof that the Communists don’t care who, or how old, you are.

Among the others arrested: Carol Ng, a fearless union organizer for the democratic cause; 33-year-old Jimmy Sham, who helped organized the massive 2019 protests; former lawmakers Claudia Mo and Alvin Leung; and activist Lester Shum.

“We have long before decided that we would not bow to authoritarianism,” Shum said of Sunday’s charges, saying the road to the current moment was paved by the 2019 protests. “I hope that everyone will carry this decision in the very difficult days ahead.”

There is hope that the people won’t back down: On Monday, several hundred citizens queued up outside the West Kowloon Magistrates’ courts to protest and show their solidarity for the 47 charged. Police tried to disperse the crowd, raising a purple flag, signaling a warning that national-security violations might be occurring by their “unlawful assembly.”

Nevertheless, the supporters, led by Civil Human Rights Front leader Figo Chan, unfurled banners and chanted “release all political prisoners” and “liberate Hong Kong, revolution of our time!” The latter slogan is no doubt deemed illegal under the national-security law.

If the political prisoners are indeed convicted — as it looks likely — they will all face up to 10 years behind bars. Or worse, as is feared for the billionaire Lai, life in prison.

Hong Kong Watch’s Benedict Rogers painted the reality of what’s going on quite starkly: “Today marks the first time that almost every prominent Hong Kong pro-democracy activist is either in jail, exile or on trial awaiting sentencing.” He adds that “the charging of pro-democracy organizers and candidates” is “a new low in Hong Kong’s steady decline into authoritarian rule.”

But one thing is certain, Samuel Chu at the Hong Kong Democracy Council tells me: Hong Kongers aren’t afraid. “The CCP and Hong Kong authorities are much more scared of Hong Kongers” than the other way round. “And nobody is taking their eyes off Hong Kong, as much as China wants that to be the case.”

Elisha Maldonado is a member of the New York Post Editorial Board and a senior fellow at the Independent Women’s Forum.