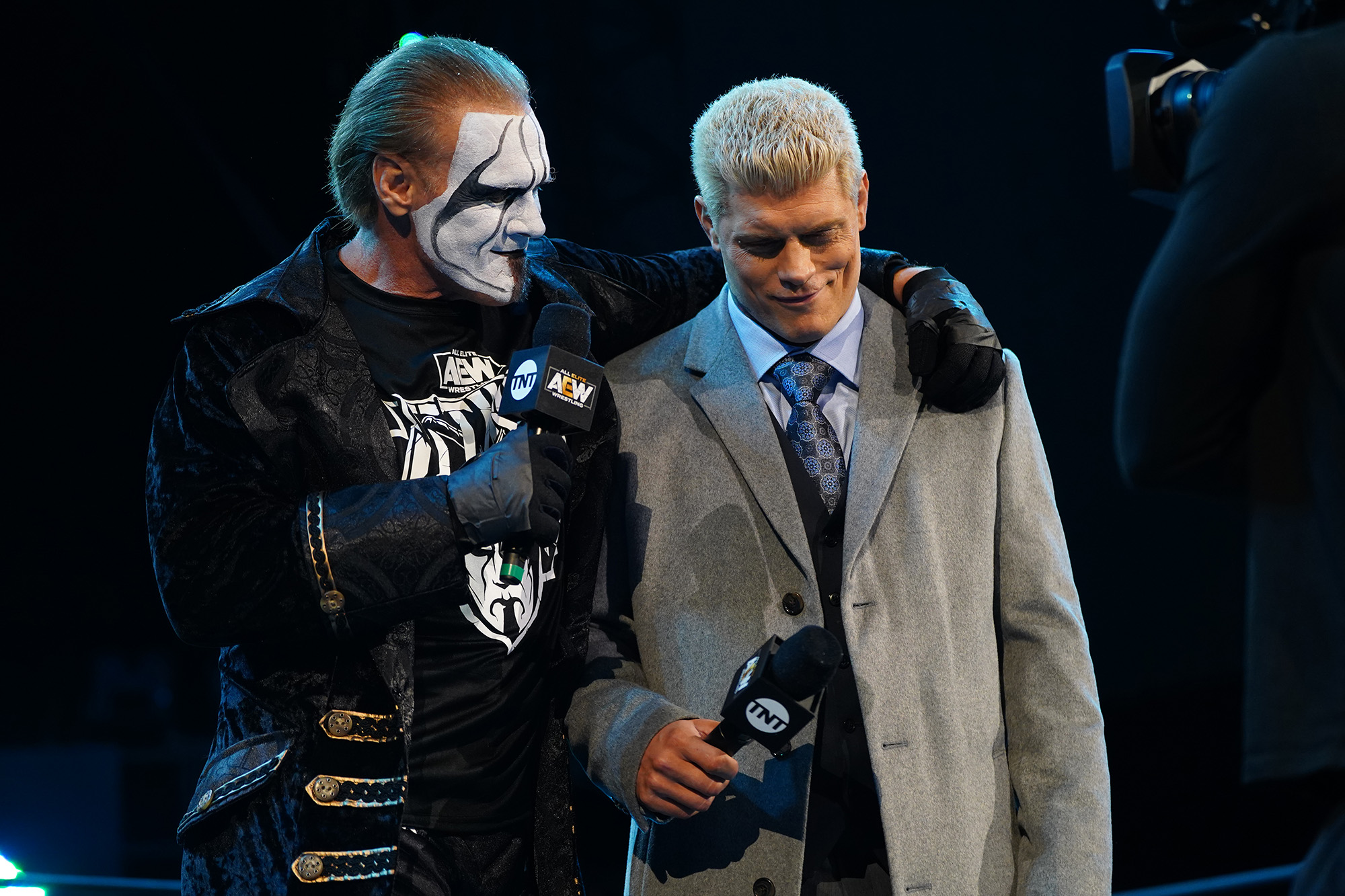 Cody Rhodes has made it clear he wants a dream match with Sting, his favorite wrestler growing up. It is if, when, and how that encounter will take place in All Elite Wrestling that’s the question, and Rhodes hinted it could be done in a way cinematic matches have yet to be presented to the audience.

“To me, the cinematic matches, they really don’t have a current definition,” Rhodes said in a phone interview when asked if a cinematic match as opposed to a traditional one would satisfy his Sting itch. “I’ve seen the Stadium Stampede. I’ve seen the Boneyard [match]. I’ve seen various different ways to present cinematic.

“And really cinematic just means with different camera cuts. It can mean a lot of things, but ask me that question again in a few months because I want the opportunity to stand across from the Stinger and I think he knows that. It’s almost kind of itching at me under my skin that if there is somebody I wanted to beat, it’s the face of TNT’s hottest period and run.”

Sting said on AEW’s “Unrestricted” podcast shortly after debuting in December that company president Tony Khan had asked about his interest in doing cinematic matches. The 61-year-old former WCW staple is unlikely to be cleared to have a traditional match because he was diagnosed with cervical spinal stenosis after suffering a severe neck injury in a WWE championship match against Seth Rollins at “Night of Champions” in September 2015.

Sting, who dismissed Rhodes during their lone in-ring promo with a “see ya ’round kid,” will have his first match since then when he teams with TNT champion Darby Allin against Brian Cage and Ricky Starks in a streetfight at AEW’s “Revolution” pay-per-view on March 7. The 35-year-old Rhodes, one of AEW’s four executive vice presidents, has an added interest in how that match works out as far as what comes next for Sting.

“I’m going to be watching like everyone else at ‘Revolution’ and then the decision will become a little bit more clear,” he said. “With what happens at ‘Revolution’ and how him and Darby are able to navigate that stream, then ask me in a few months and I’ll have a better answer.”

Sting signed a multi-year deal with the company, but this is likely his last run in pro wrestling as he gets a chance to hopefully write a satisfactory ending to his storied career. Rhodes understands the responsibility he and AEW are tasked with, comparing Sting’s presence in the locker room to that of the recently retired Undertaker in WWE.

“There was a time where six million people, eight million people were watching wrestling and there are very few people who lived that period of time and who were big stars,” Rhodes said. “Really there are none active other than Sting. He just brings this credibility, this aura and this wisdom, to what he does.”

Rhodes, whose father Dusty and brother Dustin worked with Sting for many years in WCW, has a reverence for both the character and the man behind it, Steve Borden. He says it’s amazing when Sting asks him a question or “what do you think of this?” Rhodes added that he doesn’t plan to share a lot of his interaction with Sting backstage “because that character is so damn magical and special.”

“I want people to think he’s just that all the time,” Rhodes said. “That’s who he is. He’s just walking around face painted, the long coat because that’s how I see him. When he walks through the back, the common area right before you get to the go position where my office is, where Tony’s office is, there is the common area and when he walks through there it changes the mood.

“Every local who might be working ‘Dark’ that night, guy who is chomping away, then when you see him he really brings this great presence. That alone is really invaluable and the fact that he’s on TV and we’ve only seen the tip of the iceberg with I think what Sting is capable of.”