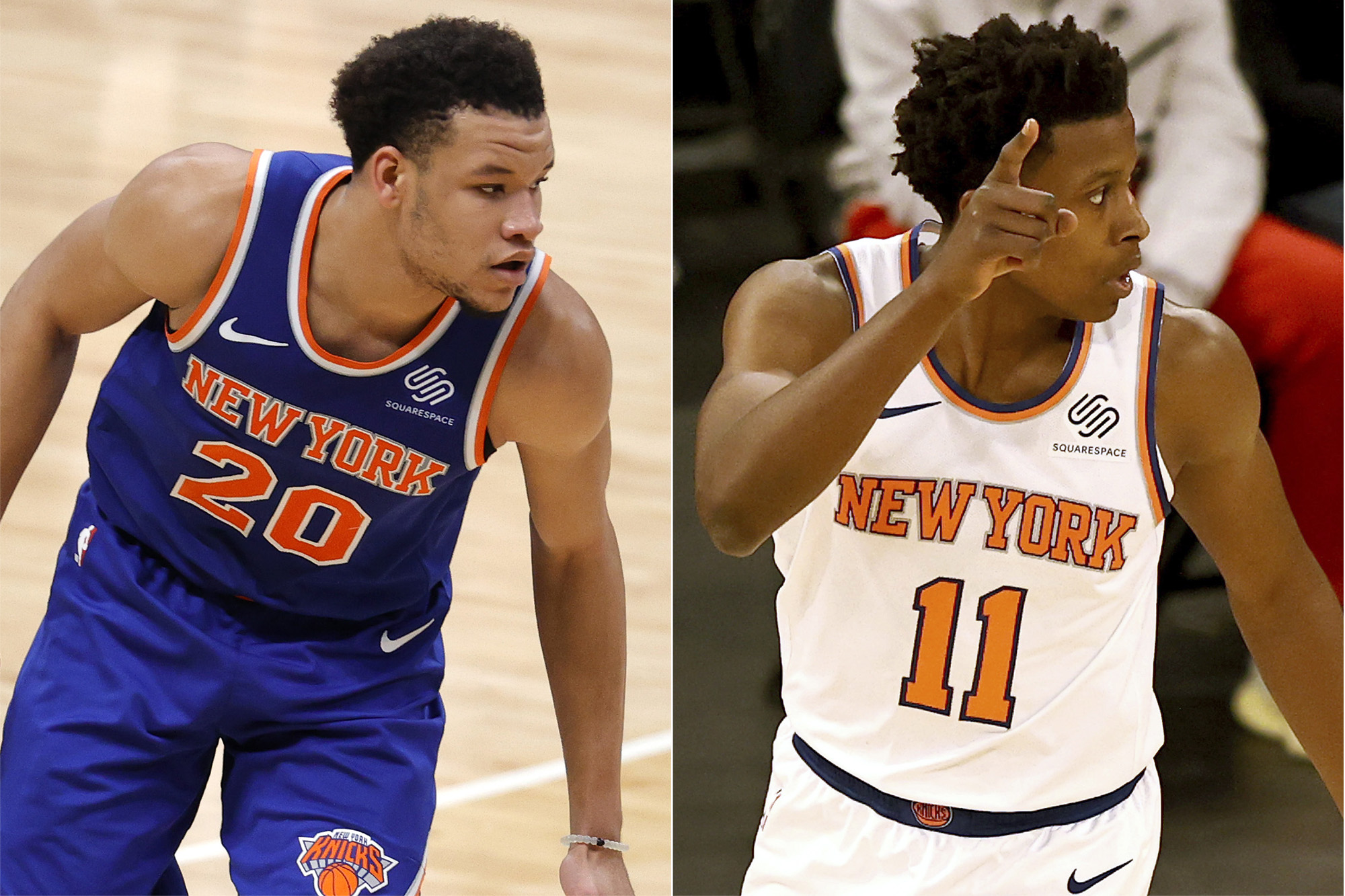 Frank Ntilikina was selected eighth in the 2017 draft. Kevin Knox was picked ninth in 2018.

At this stage of their careers, neither Knicks lottery pick probably expected this.

Neither expected they’d be out of the Knicks’ rotation and serving as mop-up men Saturday in the Knicks’ sixth-highest margin of victory in franchise history — a 44-point bludgeoning of the Pistons, 125-81.

Knicks coach Tom “No Lead is Safe” Thibodeau doesn’t easily give out free garbage-time minutes to end-of-the-bench guys but in this case, he was in the clear. The Knicks led, 41-14, after one quarter, and it was never close.

Knox played the final five minutes and was 3 of 3 — all 3-pointers — for nine points. Ntilikina, the French point guard who will be a restricted free agent on Aug. 1, played the final 2:44.

Unsolicited, Thibodeau gave each a shout-out after the rout. Neither has complained in their extremely rare Zoom interviews, and they have been vibrant cheerleaders on the bench.

“Kevin and Frank have been phenomenal,’’ Thibodeau said. “I know when they’re called upon they’ll be ready. It’s important for them to get minutes. At some point, you need everyone.’’

Austin Rivers, who the Knicks shipped out at the March 25 trade deadline, didn’t handle his demotion well, and that’s why he’s now a free agent.

Ntilikina has been in the rotation on occasion but only when the Knicks have sustained major injuries at point guard. Knox was bounced in late January. Their Knick futures are murky.Meanwhile, Knox is shooting 41 percent from 3-point land — by far his career-best.

Thibodeau’s dismissal of defensive-minded Ntilikina has been a disturbing mystery. According to a league source, Thibodeau thinks Knox has potential, but his motor isn’t high enough to be relied upon defensively every night as the team scraps for a postseason berth. The Knicks are in seventh place.

The Knicks have one roster spot open and are looking for a scoring wing.

Ben McLemore reportedly was to be waived by Houston. The 6-foot-3 shooting guard has been a good bench scorer in his career. However, the 28-year-old has shot just 33.1 percent from 3 this season and had been mostly out of the rotation.

In order for a player to be eligible for the playoffs with his new team, he must be waived by April 9.

With the compacted pandemic schedule, Thibodeau has cut back on formal practices. Sunday was an off day because it was coming after a back-to-back. But on the prior three off days, Thibodeau didn’t conduct practice either.

“It’s the challenge of the season,’’ Thibodeau said. “For us, it does hurt us from the standpoint it’s a new team this year. That practice time is critical. But you have to weigh against where you are in the schedule in terms of travel and amount of games.“We’re in a heavy stretch right now. You have navigate it and be smart about it, and we’re trying to manage it with film sessions, walk-throughs. That’s the challenge every team faces with a condensed schedule.’’

Pulse oximeters may be inaccurate on people of color