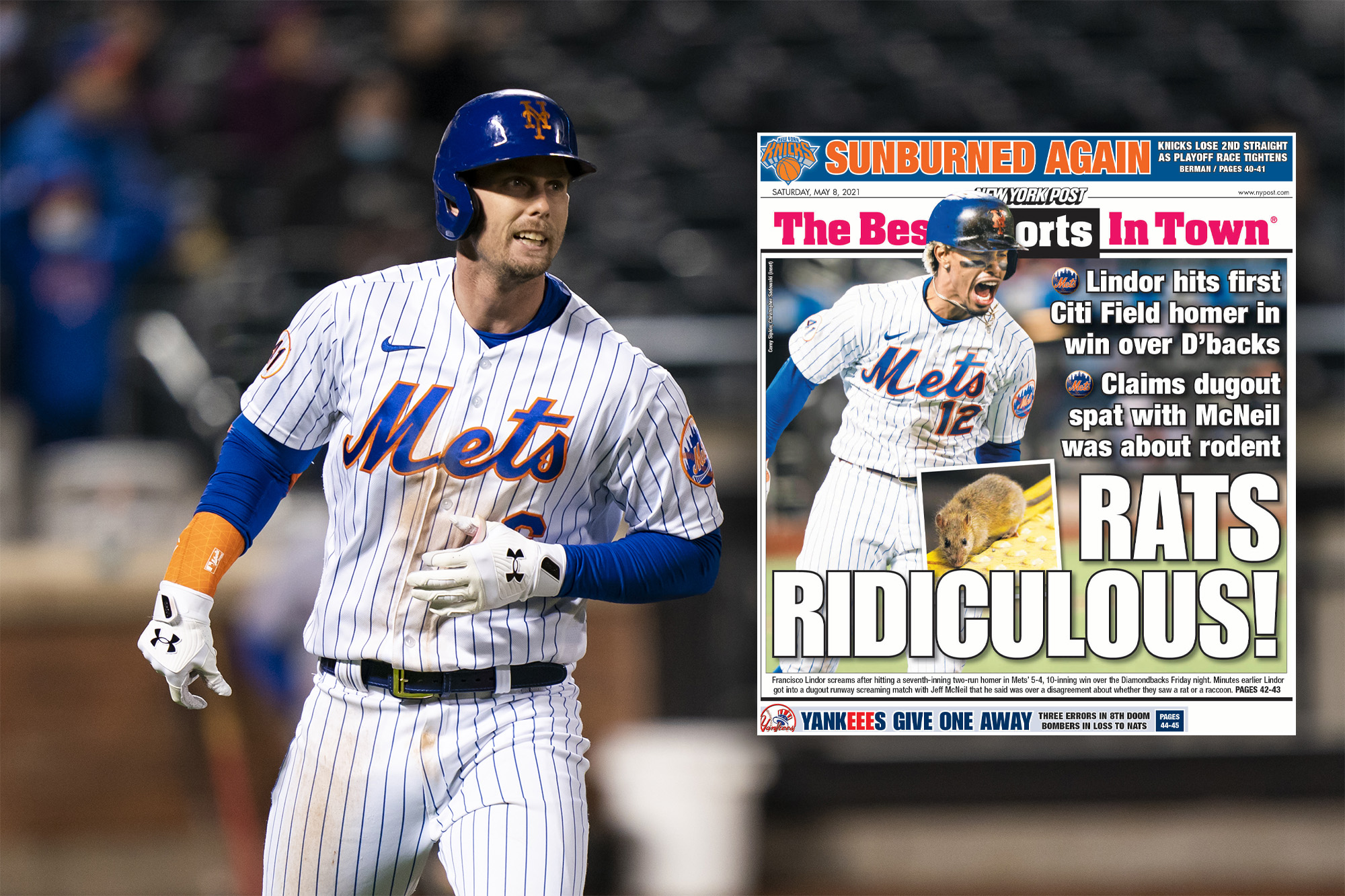 Mets manager Luis Rojas didn’t back up the rat or raccoon story concocted by Francisco Lindor and Jeff McNeil, and neither did acting general manager Zack Scott.

Something happened in the tunnel connecting the Mets dugout to its clubhouse Friday night between the two infielders, and on Saturday, Scott addressed whatever that was without offering any details, but making some eyebrow-raising comments.

Among those, Scott said he wouldn’t have handled it the way the two players did, with their words making it seem like a fabrication to cover up something more serious. Scott also described it as “not ideal.”

“You’d have to ask the players that, why they chose to handle it that way,” Scott said before the Mets hosted the Diamondbacks at Citi Field. “It’s definitely not how I’d go. What’s unfortunate is it’s a little bit of a bigger story than it needs to be, and it takes away from one of our best wins of the year.

“The best way to handle these things is be as transparent as you can be without divulging things that people don’t want out there, to address it, to hit things head on,” Scott added. “I’m not saying that to criticize what the players did [Friday] night. Wouldn’t be my recommendation, and no one in the organization would make that recommendation to handle it that way, but what’s what they chose to do for whatever reason.”

In the middle of the seventh inning of the Mets’ come-from-behind, 5-4, 10-inning win Friday night, Lindor and McNeil appeared to be involved in some type of commotion in the tunnel off the dugout. Several teammates subsequently raced down the tunnel, out of the view of television cameras.

In the top of the seventh inning, Arizona’s Nick Ahmed got an infield single after hitting a ground ball between McNeil and Lindor. Both hesitated going for the ball, before Lindor fielded it, but threw to first too late to get Ahmed. McNeil called it a miscommunication and Lindor faulted himself. It wasn’t the first time something like this has happened.

“The communication on ground balls is something that Francisco is very active on, and McNeil is as well,” Rojas said. “One gets in agreement with the other, either someone’s going to cut in front or another is going to behind, and that’s how it should be. It’s happened a couple times where they both go into the same lane and they have to put on the brakes and the ball gets through.”

After the game, Lindor said he spotted a rat somewhere down the tunnel, but McNeil claimed it was a raccoon. Both seemed in good spirits as they laughed about the situation. Rojas, who didn’t go along with the story on Friday night, said he has spoken to McNeil and Lindor, as well as with other players, about the incident in question. The manager acknowledged there was a disagreement of some kind, but didn’t believe it is something that will linger or negatively impact the team.

“You always create opportunities when things are said and you can have conversations about it,” Rojas said. “We get along here as a family. We’re brothers. There’s agreements, there’s disagreements, and at the end of the day they both make us better.”

Somewhat lost in the hoopla of whatever did or didn’t happen was the Mets’ rallying from a four-run deficit against the Diamondbacks and Zac Gallen, one of the best pitchers in the National League. Lindor produced his biggest hit as a Met, a two-run, game-tying home run in the seventh inning. McNeil went 1-for-5 and has hit safely in five of his past six games.

Lindor’s homer came shortly after the incident in the tunnel.

“We’re a better ball club [right now] because of what happened,” Rojas said. “What I can tell you is we’re together today.”