Trump shows signs of being king-maker rather than king 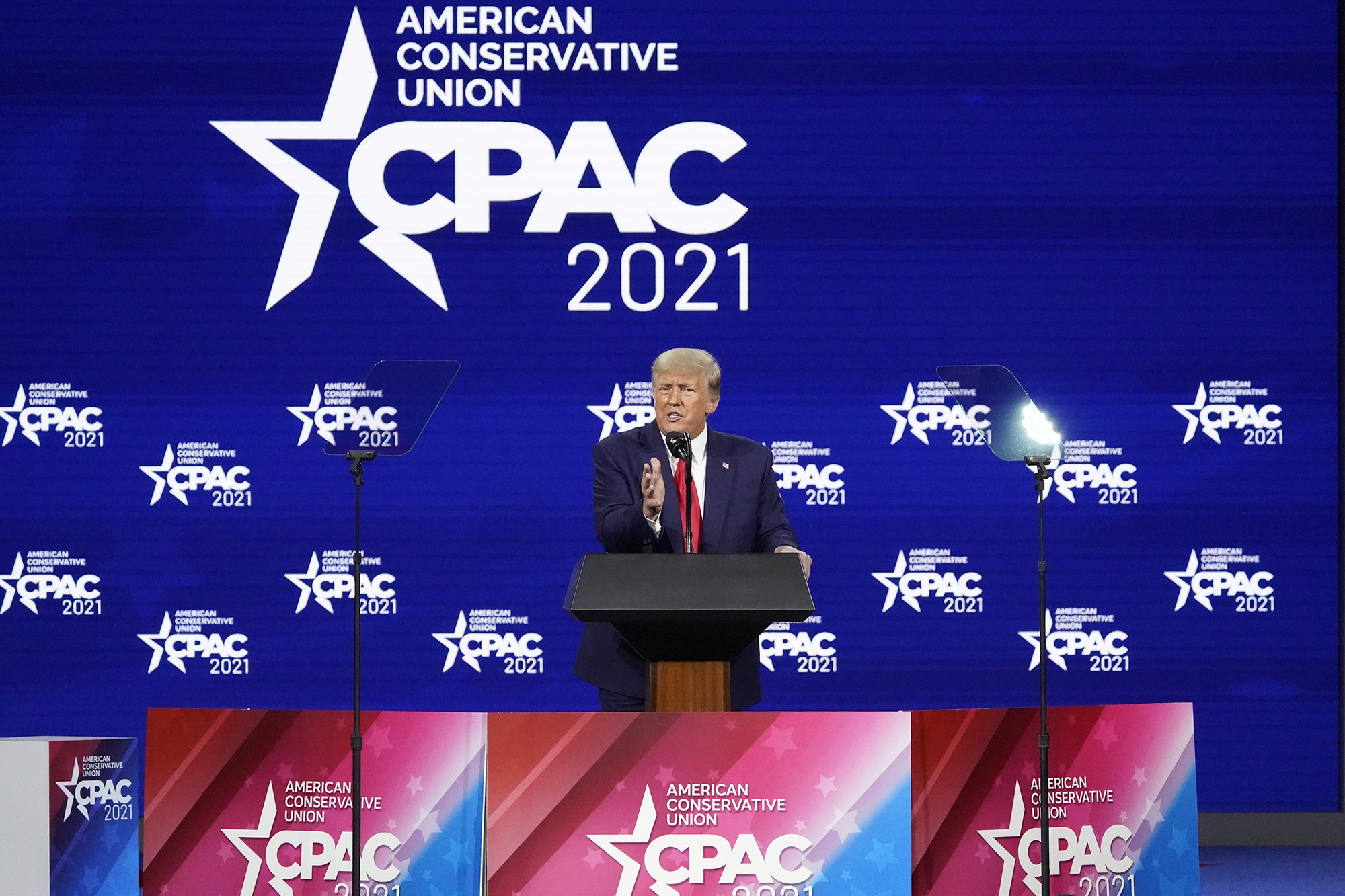 When Donald Trump took the stage to a standing ovation at CPAC in Orlando Sunday, it quickly became clear why so much effort has been poured into discrediting the event.

From the delusional lie that the stage was designed as a Nazi symbol, to plotting to de-platform the cable channels which air the conservative conference, to bemoaning the Fauci-proscribed fun being had, to outright wishing violence on the participants, Democrats and their slavish bots in the media and twitter have been frantic.

No wonder. There is no one quite like Trump for forensically demolishing the opposition. He sunk the shiv in so deep in the Biden administration, that he framed the political narrative for months to come.

“Joe Biden has had the most disastrous first month of any president in modern history,” he said.

He laid it all out, deftly contrasting Biden’s blunders with his successes. Secure borders, more jobs and higher wages, vs Biden’s immigration disaster on the southern border. Energy independence vs the axing of the Keystone XL pipeline and the rising price of gas. Beneficial trade deals vs the economy-sapping Paris climate accord. Historic peace deals in the middle east “with not a drop of blood shed” vs Biden’s immediate lifting of sanctions against Iran.

Ending the “endless wars,” with not one American soldier killed in Afghanistan for a year, vs the Biden administration’s determination to empower Iran and see regime change in Syria.

The “calculated bet” Trump took pumping billions into vaccine development and manufacture, the staggering 20 million doses produced and 1.5 million shots in arms by his last day of office vs Biden’s claim that he had to start from scratch.

“We all knew the Biden admin was going to be bad, but none of us imagined just how bad they would be and how far left he would go… We didn’t know what the hell he was talking about, actually.”

The crowd roared with laughter. “We love you” they chanted later.

But for all his political gifts, Trump should not be squatting on the prospects of promising younger candidates who will be coming into their own in 2024, some of whom showcased their wares in Orlando over the weekend.

Most impressive were the competent governors Kristi Noem and Ron DeSantis who avoided draconian lockdowns, followed the science, trusted their people, protected the vulnerable, and proved to be the real “gold standard” in pandemic leaders.

Notable too was Mike Pompeo, who is clear-eyed and resolute on China.

So, just because Don Jr. thinks the Republican party’s future begins with a “T” does not mean a Trump should be the nominee.

He just was the only person resilient enough and impervious enough to elite opinion to force through its successful policies in the face of ferocious resistance.

He transformed the GOP, showed conservatives success is possible and forged the path for his successors. He will be 78 next time, as old as Biden, and America has had enough of geritocratic rule. It is time for a new generation to take charge.

Trump only teased his 2024 plans Sunday: “Who knows, I may just decide to beat them for a third time,” he said to huge applause.

But he gave promising signs that he would prefer to play the role of king-maker rather than king.

“For the next four years the brave Republicans in the room will be at the heart of the effort to oppose the radical Democrats and the fake news media and their toxic cancel culture… And I want you to know I’m going to continue to fight right by your side.”

He stated the obvious, that he is not starting a new party. “That was fake news. Wouldn’t that be brilliant… start a new party so we can divide our vote so we can never win.”

He also punctured the myth that the Republican party is engulfed in a “civil war”.

“The only division is between a handful of Washington DC establishment political hacks and… the rest of the country.”

He named those dozen or so “RINOs” – Republicans in Name Only”. Liz Cheney drew the biggest “boo” from the crowd.

“Get rid of them all”, he said, vowing he would be “actively working” to help elect the “strong, tough” Republican leaders of the future.

Which is exactly how Trump will be of maximum use to the movement which bears his name.

After the suffering of the past year, it’s shameful that the Biden administration still plans to go ahead with the 2022 Winter Olympic Games in China.

The International Olympic Committee refuses to act, so the only option we have left is a boycott.

We can’t reward China after it unleashed the virus that has killed half a million Americans.

Handing the Chinese Communist Party a massive propaganda victory is an insult to the dead, to the people of Hong Kong, the Uighurs and other victims of Chinese state brutality — or what Joe Biden calls “culturally . . . different norms.”

For America, it would be the ultimate humiliation to go to the Beijing Olympics and pretend it’s business as usual.

If we’re worried a boycott would hurt the athletes, we should run our own alternative winter games. Call it the Freedom Games.

Lake Placid, NY, would be a perfect venue or, if that’s too hard for the incompetent Andrew Cuomo, Salt Lake City, Utah, did a good job 20 years ago.

Generous cash prizes could be offered to lure athletes from around the world away from Beijing’s embrace.

Hey, the Big Tech oligarchs could do something patriotic for once and underwrite our Freedom Games.

Why is Jill Biden answering policy questions in interviews alongside the president? We know Joe struggles to speak coherently without notes, but his wife should not be butting in to provide a better answer or prompting him when he forgets words. Her interventions were blatant during an interview with Univision about the reopening of detention centers for child migrants illegally pouring over the southern border.

Dr. Jill interjected to claim that the “cages,” as Democrats called them in the Trump era, were “humane.” No one elected her.

A lesson in Fonda

Jane Fonda was honored with the Golden Globes’ most prestigious award Sunday but, at 83, she still hasn’t figured out why success in marriage has eluded her.

“I’ll tell you something that I haven’t achieved, which is a successful marriage,” the ageless actress told NBC.

“I don’t ever want to be married again. But it’s something I wish I’d been better at.”

Herewith an anecdote that might shed light on that little mystery.

Many moons ago, when Fonda was married to her third and final husband, Ted Turner, and I was working for the Boston Herald, I nabbed an interview on the run with the CNN founder.

He agreed to talk, but only if I followed him around their hotel suite as he packed, because they had a plane to catch.

Boy, was that a job and a half! The room looked as if a lingerie bomb had exploded. There were ladies’ garments and lotions and potions everywhere, so Turner took a ruthlessly pragmatic approach. He opened a big bag and swept all Fonda’s detritus into it, underwear and lipstick, perfume and shoes. Whoomph, whoomph, in it all went, jumbled together with purposeful equanimity.

He talked pleasantly throughout, as if strolling in a park, not trashing his wife’s personal possessions. No sign of madam, but she can’t have been happy when she opened the bag.

Just a thought, all these years later. Maybe her husbands were sick of cleaning up after her.

Marcellus Earlington starting to step up game for St. John’s