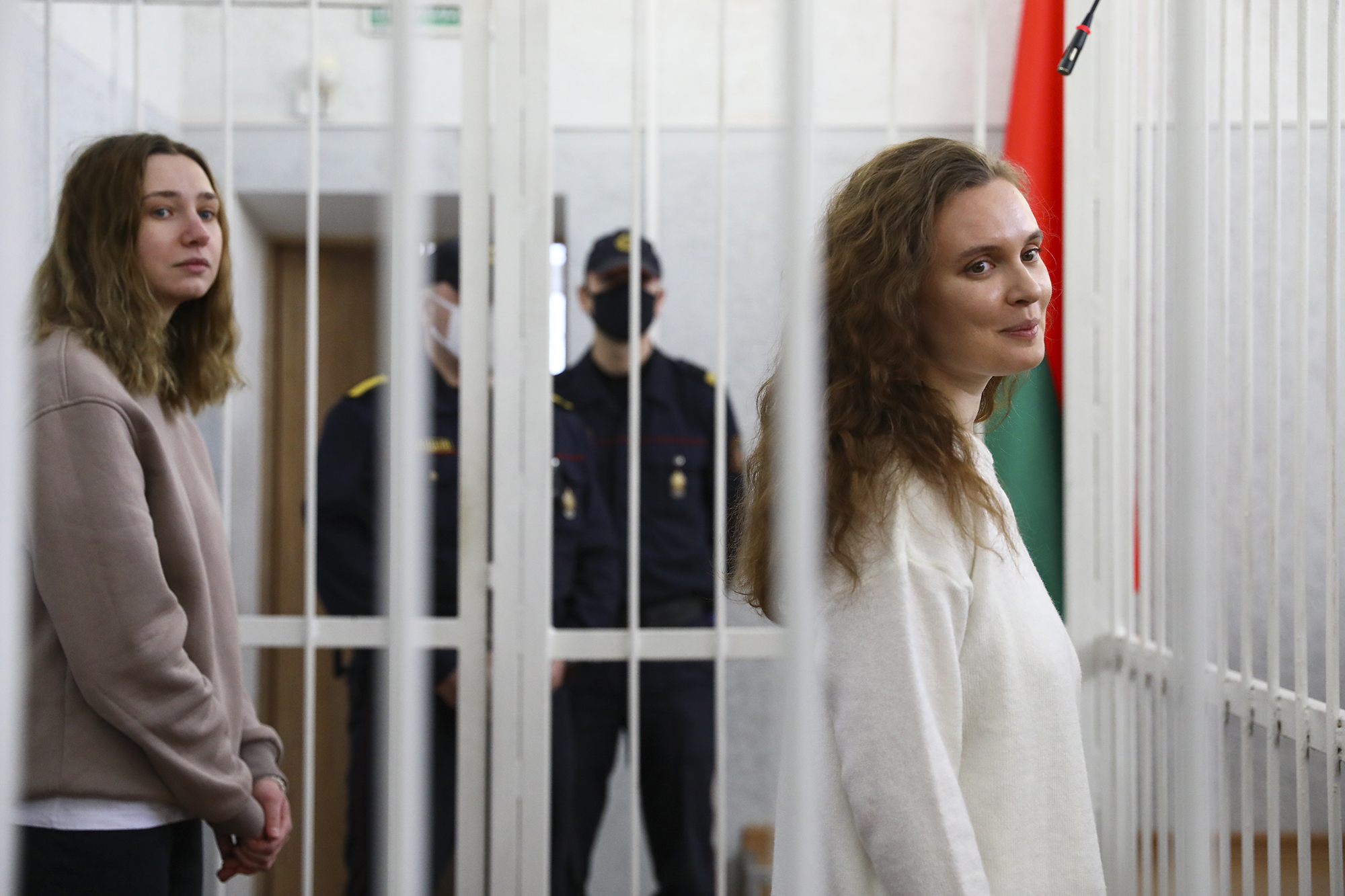 KYIV, Ukraine — Two journalists in Belarus were convicted Thursday of violating public order and sentenced to two years in prison after they covered a protest against authoritarian President Alexander Lukashenko.

Katsiaryna Bakhvalava, 27, who also goes by the last name of Andreyeva and Daria Chultsova, 23, both of the Polish-funded Belsat TV channel, were arrested in November after police broke down the door of a Minsk apartment where they doing a live stream of a demonstration in the Belarusian capital.

Addressing the court before the verdict, Bakhvalava vowed to continue working for “building a Belarus that won’t have political repressions.”

“I’m not pleading. I’m demanding acquittal for me and my colleagues,” she said, referring to other jailed journalists.

The U.S. Embassy in Belarus has called for their release and urged authorities to stop prosecuting journalists for doing their job.

More than 400 journalists have been detained in Belarus in the last six months and at least 10 have faced criminal charges and remain in custody.

“We consider the sentence politically motivated, its goal is to scare all journalists to prevent them from fulfilling their professional duty to cover socially important events in the country,” the Belarusian Association of Journalists said. “That effectively amounts to a professional ban.”

The International Federation of Journalists denounced the ruling as “shameful and totally unfounded.”

“Today’s verdict is a clear attack on press freedom and we all stand together against this mockery of justice,” federation president Younes Mjahed said in a statement.

Belarus has been rocked by protests after official results from the Aug. 9 presidential election gave Lukashenko a sixth term in office by a landslide. The opposition and some poll workers have said the election was rigged.

Authorities in the Eastern European nation have responded with a sweeping crackdown on the demonstrations, the biggest of which attracted up to 200,000 people. Human rights activists say more than 30,000 people have been detained since the protests began, with thousands brutally beaten.

The United States and the European Union have responded to the election and the crackdown by introducing sanctions against Belarusian officials.

After the verdicts, Polish President Andrzej Duda asked the country’s diplomats to convey strong criticism of the crackdown on freedom of speech and civil rights to the Belarusian authorities, according to his top aide, Krzysztof Szczerski.

He noted that Poland is urging its EU partners to respond to the suppression of basic rights and freedoms in Belarus.

In a strongly worded comment, the head of the Belsat TV in Poland said sentencing the journalists was “proof that the political terror in Belarus is being tightened,” and she harshly criticized the EU for a muted response.

“Our employees must operate as if in a war and they suffer measurable losses,” Agnieszka Romaszewska-Guzy said in an opinion piece posted on the Belsat website. “They pay with their personal freedom for promoting free speech.”

She vowed to take “the European Union out of its slumber and make sure that politicians take real steps instead of only offering words of indignation over the developments in Belarus.”

“I am very critical of actions taken so far, as being rather a pretense and hypocrisy,” Romaszewska-Guzy said.