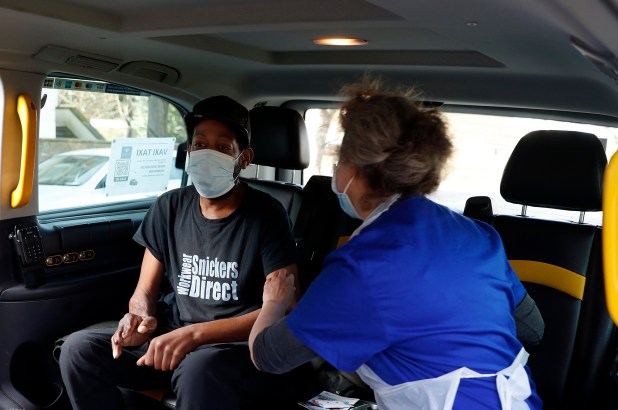 Dr. Tamara Joffe prepares to administer an AstraZeneca vaccine against COVID-19 to Leslie Reid in the back of a London Taxi cab, during a pilot project of pop up vaccination drive called Vaxi Taxi in Kilburn, London on Feb. 28, 2021.
AP

It’s the “Vaxi taxi” to the rescue in Britain for people worried about how to get to a vaccination center.

Stagehand Leslie Reid, 48, said the cab was a godsend for him because he has a compromised immune system and feared taking public transportation to get a vaccine, the AP reported.

He was thrilled when his doctor offered a door-to-door cab, a new initiative rolled out in Britain to encourage minorities to get vaccinated.

“I was one of the fortunate ones,” he said after getting the jab in north London. “I’m sure there are plenty more vulnerable people than me that should have gotten this. What can I say? I’m very glad.’’

Britain has a very effective coronavirus vaccination programs. At least 30 percent of its population has gotten one dose. But minorities have lagged behind.

A recent national survey found that just 72.5 percent of Black people in England either have received or would accept the vaccine. That compares with 87.6 percent for Asians and 92.6 percent for whites, the AP said.

In addition to the vaxi taxis, activists have also organized pop-up vaccination centers in minority neighborhoods to encourage residents to get the jab.

Vaccines Minister Nadhim Zahawi told the AP that data showing that people want access to the vaccine at a time of their choice and in a place they trust.